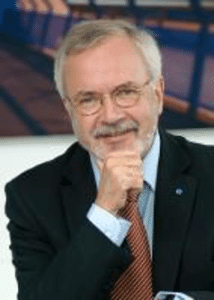 Investment, infrastructure and innovation were the theme of Werner Hoyer’s discussion with the New York European American Chamber of Commerce discussion on January 12.
Dr. Hoyer, in conjunction with a panel of finance, economic, advisory, and risk experts, described the investment environment in the European Union noting areas of opportunity and risk.

The European Investment Bank (EIB) focuses on building EU internal markets supporting and contributing to the general equilibrium across Europe.  The European Council gives direction to the bank, and the bank must abide by their investment direction.   For example, support for Russian development from the bank was stopped when sanctions were imposed on Russia as a result of Russia’s take over of Crimea.

Renewable energy, healthcare, and  technology were three innovative investment areas that were robust and growing.  Birchtree Global has also seen a rise in these industries in our portfolio of globalizing clients.   He was pleased to note the change in position on climate change by the US administration did not seem to affect the growth of innovation and the commitment of US states and cities to maintaining and growing the focus on renewables.   He cited his meeting with Jerry Brown, Governor of California, and Mike Bloomberg as evidence of this commitment from US states and cities.  The growth in the EU economy and the decline in unemployment contributed to the warm investment environment.

Challenges remain in EU member states, such as Greece and Portugal, however good efforts and results have been made over the last two years.  Low interest rates are challenging and increasing rates without stifling growth are a tconcern.  He noted as a challenge that the BREXIT decision was a bad one.  He noted the rise of nationalism, whether “America First” or “Brexit” was economically limiting growth.   Enhancing competition and innovation were seen as ways in which these challenges might be overcome.

For additional information check out the European American Chamber of Commerce (www.eaccny.com) and the European Investment Bank (http://www.eib.org).