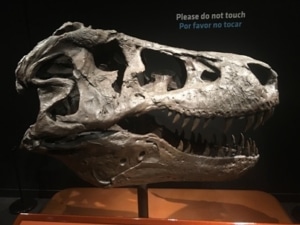 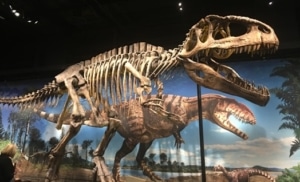 What can top Dr. Alison Felix presentation on Denver, the West and the World in 2018?  Only some of the biggest and most complete dinosaur fossils ever found!  The Denver Museum of Nature and Science has some of the best exhibitions on dinosaurs, geology, mummies, and artifacts.  The skull, shown above, is a cast of the famous “Sue” T Rex fossil.  The fully intact dinosaur fossil shows how the animal looked in the nature environment.  The red dinosaur is from the Denver Art Museum and is part of their latest exhibition on animals in art.  We are looking forward to our next Denver outing at Wings Over the Rockies on November 9 from 8:00 AM-10:00 AM.  We will be flying in the simulators and talking about increasing financial performance in private equity companies.  To register…   http://bit.ly/2wCQZFz     We love to support Denver museums! 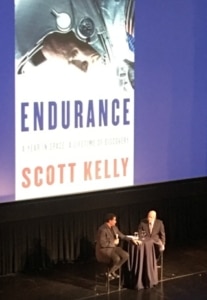 Terrific program last night at the Museum of Natural History in New York. Scott Kelly interviewed by Neil deGrasse Tyson. Scott, spent one year on the space station. The most interesting part, to me, was he was an indifferent student, destined for trade school, according to his father, until he was 18, struggling with ADHD. Reading, Wolfe’s “The Right Stuff”, changed his direction.

His most frightening moment came when NASA said it was critical his daughter speak with him on the secure link. For the 20 minutes it took to get connected he was very worried. When they were finally connected, she said she was just lonely. Drinking “recycled” water from the sewage processing device on board was an acquired taste. Working with people from other countries on which you depended, was the best part of the experience. Scott’s Russian colleague suggested instead of trying to grow tomatoes, they grow potatoes because you could live on potatoes and make them into vodka.

Highly recommend, “Endurance” by Scott Kelly, and “Astrophysics for People in a Hurry” by Neil deGrasse Tyson!