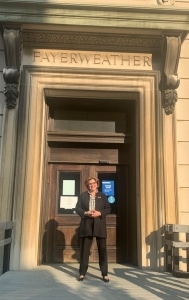 Our course in Leading Cross-Cultural Global Organizations was pleased to host Giovanni Giordano in class discussions. Giovanni’s executive HR experience includes BAT, Ferrero International, and Procter & Gamble. He led a spirited discussion on the role of #HR in cross-cultural strategy.

Tom Colella led Walmart’s International Executive Recruiting and Corporate Talent Acquisition Teams, was the Senior Client Partner and Global Practice Leader at Korn Ferry International and the Principal Deputy Assistant Secretary of the Navy for Manpower and Reserve Affairs. Tom taped his presentation and is following up by answering student questions on global staffing and #strategy.

Cathy Heyne, President, Living Abroad, and her team provided cultural assessments for each student, then compared the assessment with individual countries’ cultures.

Read More
Comments Off on Birchtree Global CEO and President, Dr. Janet L. Walsh is teaching HR executives how to maximize the positive effect of HR operations on global business.

Terrific program organized by Bucknell University on global business. All CEO’s on the panel agreed Bucknell students made the best interns and employees. Commentary included challenges in moving money back into the United States from overseas operations, thus structure of a new startup should be carefully thought through. It was mentioned that in the retail industry there is a trend towards sourcing products from online orders through local stores, the advantages included being able to keep product flowing from inventory, better connectivity with clients, faster deliveries in some cases. Global copyright violations were an issues for all firms particularly for Pfizer. All companies treated this issue as very important to the brand image and brand name. Birchtree, Pfizer, and Tommy Hilfiger pursued violations aggressively. Companies were expanding into operations in the Middle East, China, Panama, Germany, and Latin America.

Met a “soon to be famous” up and coming, fashion mogul, Johnny Picardo. who is working at Victor Alfaro designing exquisite action clothing. Exceptionally interesting person and loved the clothes, particularly the workout clothes.

Wednesday, September 25, a group of about 100 economists and traders were invited to meet with the prime minister of Japan Shinzo Abe to hear an important speech on “Abenomics” at the N.Y. Stock Exchange. The Prime Minister provided a broad based overview of his financial objectives for the next several years then took questions from the guests. He followed his remarks with a tour of the stock exchange floor by New York Stock Exchange CEO Duncan Niederauer. Niederauer spent 3 years working in Japan 20 years ago. The Prime Minister then climbed the stairs to the balcony above the trading floor and rang the closing bell.

Prime Minister Abe’s comments on women were very interesting. He quoted Ms. Siebert (referencing the Middle-East) as having stated no country can compete fully without using all their human resources. This is in reference to the cultural practice in Japan of women dropping out of the workforce to have children and not returning. Japanese women have told me this is something they must do in order to prepare their children to get into good colleagues and universities. There are limited, good, day care options for professional women. Getting into a good colleague in Japan is dependent on getting into a good primary school. Under “Abenomics” Japan is focusing on developing day care centers to free up women to participate more fully in the economy.

Most importantly “Abenomics” is focused on eliminating the barriers to foreign direct investment through reducing or eliminating financial and safety compliance requirements (focusing on self reporting and safety certification). Much as France and Ireland have recently begun aggressively courting foreign direct investment, Prime Minister Abe is focused on removing barriers to trade. Japan’s on the right trend, with the last two economic quarters positive.

His reference to Gordon Gecko, the corporate raider in “Money Never Sleeps” with Michael Douglas was not completely effective. “Today, I have come to tell you that Japan will once again be a country where there is money to be made, and that just as Gordon Gekko made a comeback in the financial world … so too can we now say that ‘Japan is Back’,” Prime Minister Abe said. This remark caused some commentary in the press this morning but I think Prime Minister Abe was trying to say after the recent economic slump Japan, the world’s third largest economy, is focused on welcoming companies particularly technology companies and green energy. The country is rehabilitating the financial infrastructure to facilitate foreign direct investment.

Thanks to Dr. Dale Akinla for facilitating the meeting!

Beautiful views occur in summer and winter at the top of Keystone Mountain in Colorado.

Read More
Comments Off on Top of Keystone Mountain

Hiking down Keystone followed by friendly Mountain Grey Jay who would sit on your hand!

On Saturday after the COSHRM conference in Keystone, CO we went hiking down the mountain. The wildlife was very friendly as illustrated by this Marmot who allowed us to get quite close and posed for our new 2014 Calendar.

The conference was a great success. Our presentation was a case study on ADP’s restructuring and development of global HRM competencies. The competencies were developed to train sales professional on the activities of global HRVPs to be become effective trusted advisors. The research was also used to train HR leaders in ADP so they could be better partners with the sales organization. We had about 100 people in the room who asked quite a few questions. The presentation highlighted the 4,500 pages of research on global HRM and showed how linking HRM with line management sales resulted in more sales but also could transform HR into a strategic asset.

If you would like copies of the presentation email: Information@birchtreeglobal.com and include your name, email, and phone.

Janet Walsh and Birchtree Global staff will be speaking at the 2014 HRPA conference in Toronto. It is one of the best run business conferences with which we’ve been associated and we’re looking forward to returning. Our speech will be on “Key Considerations in Global Start-Ups”. We look forward to skating in the park next to the conference facility and enjoying the vibrant culture of Toronto.

Read More
Comments Off on Canada in January!

Curious about Cuba? Want to see for yourself?

This 7 Day, 6 Night trip is being developed to further understand the business, art, history of Cuba. Havana was the site of the first Rotary Club established outside of the United States. We will post details as they are available and as the trip is finalized. To join the mailing list for this trip, email: info@birchtreeglobal.com. We’ll keep you updated as the trip progresses.

Read More
Comments Off on Curious about Cuba? Want to see for yourself?

Tuesday, July 10 was a memorable night at the Explorer’s Club in New York City. The author and fellow Explorer’s Club Member Clive Cussler came and regaled us with hilarious stories about his writing, exploration, car collecting, and “Madman” activities. He was at the same time charming, fascinating, droll, and a great raconteur. When I mentioned that I didn’t care much for flying and always took one of his books as a distraction, he commented that women usually took him to bed….(…reading his books!) One could immediately see where his protagonist, “Dirk Pitt” got his sense of humor.

Since I have to do a lot of writing I have been asking the authors I’ve met how they stay focused on composing for long periods of time. Christopher Buckley mentioned as a joke, “Adderall” then said he really got into his stories and didn’t find it too easy to get distracted. Clive mentioned he stayed very disciplined working to complete an average of four pages a day in writing and editing. Given Clive was a creative director in his early career it would seem staying focused on writing comes easily.

An addition to a very successful career as an author, Clive founded NUMA the National Underwater and Marine Agency to fund his search for shipwrecks. Notable finds for which he is associated include; the Hunley-a submarine first used in the U.S. Civil War; the Carpathia-the ocean liner responsible for rescuing the Titanic survivors; the Mary Celeste-famous 1872 ghost ship found abandoned in the Atlantic.

He is also a collector of antique automobiles and owns over 100 historic cars. They are housed in the Cussler Museum outside of Golden, Colorado. The cars range in age from a 1906 Stanley Steamer to 1965 Corvette Stingray. The can’t compete in my opinion however, with the 1929 burnt orange Duesenberg.

If you don’t know much about Clive Cussler I encourage you to look at his website, museum and perhaps pick up one of his Dirk Pitt novels. They are guaranteed to keep you distracted while flying…!

Read More
Comments Off on Janet Walsh and Clive Cussler

Janet Walsh, president elect, Bedford-Armonk Rotary Club hosted a farewell dinner party for Bangalore Rotary professionals visiting from India. The group had a rollicking good time sharing funny stories about travel around the US and India. Serious issues were shared as well including public health challenges, new business development, and future exchange programs. “What is great about the Rotary program is the ability to come together and work on projects that advance the common good,” said Janet Walsh. “We raised $2,500 for the Bangalore Rotary sponsored school for underprivileged students. The children we sponsor will have a better life and improve the future of their families and communities.”